Breed History The history of the Sphynx started in 1966 when a domestic cat, named Elizabeth, gave birth to a hairless kitten in Toronto, Canada. It was this natural mutation that sparked the development of the Sphynx breed. These cats and a few other naturally hairless cats have been found worldwide. They have magically been produced by Mother Nature and are the foundation for this unusual breed. Cat breeders in Europe and North America have bred the Sphynx to normal coated cats and then back to hairless for more than thirty years. The purpose of these selective breedings was to create a genetically sound cat with a large gene pool and hybrid vigor. Sphynx a very robust breed with few health or genetic problems. In the early 1990's The International Cat Association (T.I.C.A.) in North America granted championship status to the Sphynx, and in 1998 the Cat Fanciers Association (C.F.A.) of the U.S.A. granted them provisional championship status. About Sphynx In addition to being nearly hairless, it is the sphynx’s intelligence, affection, and playfulness that make them unique among felines. Sphynx have fine down on their body, or some hair on the paws, nose, tail, or outer ears. The feel of their skin can be compared to that of chamois or somewhat rubbery. Their eyes are large and lemon shaped and the neck is very flexible, in that when the cat is eyeing something curiously it can extend rather like E.T. from the film of the same name, but in a somewhat more elegant style. Sphynx crave human contact. They are intelligent and most curious, sensitive and extremely loving. However, they do take time to get to know strangers, so do not be put off if initially they study you from a distance. They love playing with people, and often show the versatility of their paws by using them as hands to acquire objects they are not supposed to have! They prefer human attention but enjoy the company of dogs and other cats. Some people believe that Sphynx are suitable for people with cat allergies, but this is not necessarily true - it depends upon the type of allergy. An allergy to fur means that you may be able to live with a Sphynx. However, an allergy to dander is a very different problem as this is basically dried saliva, which becomes airborne after cats have licked themselves. Should you have an allergy, then you need to spend time with the cats to see if there is any reaction. Of course, you may find that if there is a reaction you can learn to live with it, since the pleasure the Sphynx gives may well outweigh the discomfort. CFA Breed Standards GENERAL: the most distinctive feature of this cat is its appearance of hairlessness. The Sphynx is of medium size and body conformation with substantial weight for its size. Females are generally smaller than males. The head shape is a modified wedge, with prominent cheekbones and whisker pads giving a squared appearance to the muzzle. The body is warm and soft to the touch, with a skin texture akin to either a soft peach or a smooth nectarine. The Sphynx is sweet-tempered, lively, intelligent, and amenable to handling. HEAD: the head is slightly longer than it is wide, with prominent cheekbones and a distinctive whisker break. The skull is slightly rounded with a flat plane in front of the ears. The nose is straight and there is a slight to moderate palpable stop at the bridge of the nose. CHEEKS AND CHEEKBONES: prominent, rounded cheekbones which define the eye and form a curve above the whisker break. MUZZLE AND CHIN: whisker break with prominent whisker pads. Strong, well developed chin forming perpendicular line with upper lip. EARS: large to very large. Broad at the base, open and upright. When viewed from the front, the outer base of the ear should begin at the level of the eye, neither low set nor on top of the head. The interior of the ears is naturally without furnishing. EYES: large, lemon-shaped, with wide-open center while coming to a definite point on each side. Placement should be at a slight upward angle, aligning with the outer base of the ear. Eyes to be wide set apart with the distance between the eyes being a minimum of one eye width. Eye color immaterial. BODY: the body is medium length, hard and muscular with broad rounded chest and full round abdomen. The rump is well rounded and muscular. Back line rises just behind the shoulder blades to accommodate longer back legs when standing. Boning is medium. NECK: the neck is medium in length, rounded, well muscled, with a slight arch. Allowance to be made for heavy musculature in adult males. LEGS AND FEET: legs are medium in proportion to the body. They are sturdy and well muscled with rear legs being slightly longer than the front. Paws are oval with well-knuckled toes; five in front and four behind. The paw pads are thick, giving the appearance of walking on cushions. TAIL: slender, flexible, and long while maintaining proportion to body length. Whip-like, tapering to a fine point. COAT/SKIN: the appearance of this cat is one of hairlessness. However, short, fine hair may be present on the feet, outer edges of the ears, the tail, and the scrotum. The bridge of the nose should be normally coated. The remainder of the body can range from completely hairless to a covering of soft peach-like fuzz, no longer than 1/8th of an inch (two millimeters) in length. This coat/skin texture creates a feeling of resistance when stroking the cat. Wrinkled skin is desirable, particularly around the muzzle, between the ears, and around the shoulders. There are usually no whiskers but if whiskers are present they are short and sparse. COLOR: color and pattern are difficult to distinguish and should not affect the judging of the cat. White lockets, buttons, or belly spots are allowed. 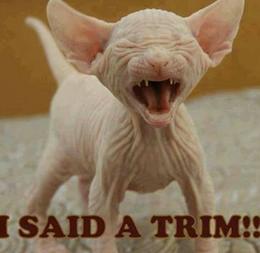 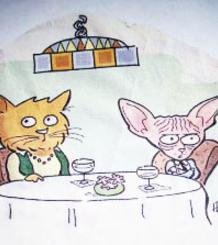 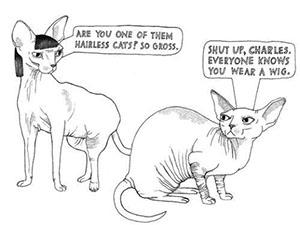 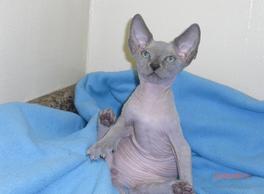 WHAT? CAN'T I SIT DOWN A LITTLE BIT? 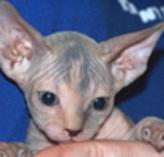